It’s not uncommon to remake a popular horror film — some are grittier than others — but it’s not often that a horror remake is able to capture the true spirit of its original. With 2021’s Slumber Party Massacre, however, writer Suzanne Keilly (Leprechaun Returns, Ash vs Evil Dead) and director Danishka Esterhazy (Level 16, The Banana Splits Movie) have found a perfect celebration of the original film and its feminist intent, while adding their own distinct improvements.

In the film, a group of girls go to a remote cabin for a good old fashioned slumber party. There’s drinking, dancing, and a deranged killer. You know the drill. But Esterhazy’s Slumber Party Massacre excels at setting you up for a run-of-the-mill slasher before completely subverting your expectations. There are so many details that show a deep and loving respect for the original films — character names, props, a kid sister, and Russ Thorn’s detail-accurate recreation — but perhaps the greatest homage the film offers is its treatment of its male characters. The slow motion pillow fights and shower scene are a perfect way to lambast the sexualization of the original franchise (which was strongly encouraged by Corman, despite how the directors felt about it). Their inability to run away and even their names (which literally include Guy 1 and Guy 2) poke fun at the treatment of female characters in 80s horror as a whole, while notes on toxic masculinity offer logistical reasons for very bad ideas.

For those familiar with Leprechaun Returns, you may feel a familiar vibe with Slumber Party Massacre. Both of Keilly’s scripts have a fun take on the original film that sprinkles social commentary in a way that keeps it from feeling heavy-handed. This balance of humour and horror is perfectly captured by Esterhazy; between the script and the staging, I had moments where — in my house, all alone — I was literally laughing out loud at the delightful absurdity.

The original Slumber Party Massacre was intended as a parody, but producers pushed for a more conventional slasher film. With the remake, Esterhazy definitely leans into the parody angle, but that doesn’t keep her from building some legitimately tense moments of horror goodness. Practical effects are awesomely gory without being excessive; every victim of drill-bit carnage is impressively done.

Slumber Party Massacre is a bitingly clever slasher for the modern woman. It’s the perfect companion piece to the original movie; chock full of references that you’ll appreciate all the more if you see the 1982 classic, but different enough that you’ll have an entirely new viewing experience.

The spirit of Slumber Party Massacre is alive and well in this remake. Keilly and Esterhazy knew exactly what they wanted to do, and it feels like a true accomplishment. Presented with humour, tact, and a great deal of care, the film is a perfect way to honor the original while doing something completely different.

Modern horror remakes, take note. This is how you do it right. 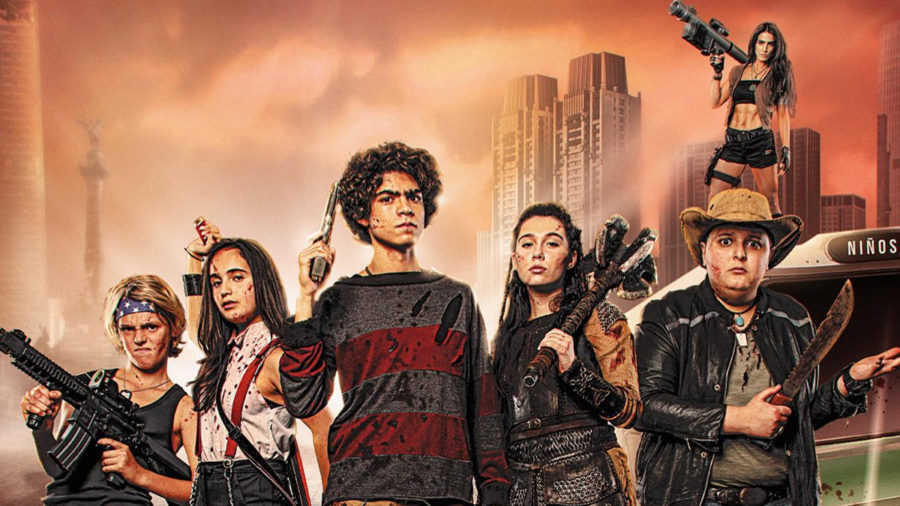 Along with writers Luis Gamboa and Santiago Limón, director Chava Cartas has crafted a celebration of youth, life, love, and film with the charming (if not awkwardly named) feature, MexZombies. In a world full of violent zombie apocalypse movies, this one’s for the teens.

In a gated community in Mexico, Halloween festivities take an unexpected turn when the quiet suburb is overrun by the shambling undead. Only a small group of kids are aware of the chaos unfolding around them, and the fate of the world falls into their teenage hands.

MexZombies stars an ensemble cast of talented young’uns. Marcelo Barcelo is comically cheeky as cinephile Cronos, Iñaki Godoy wins hearts as underdog Tavo, Luciana Vale is impressively savvy as sardonic Rex, and Vincent Michael Webb’s repeated self introduction as American tourist Johnny is… surprisingly funny. These kids bring a lot of their own authenticity to their roles, and you can’t blame them for having a blast as they slash their way through a horde of zombie neighbors. And it’s nice to see actual teenagers playing their age! Sorry 20-something year old American actors, but you’re not fooling anyone.

The film deftly weaves typical teen troubles into the zombie-killing action. MexZombies sings the frustrated teenage anthem of “parents just don’t understand” while juggling themes of unrequited love and class disparity. These themes are approached with a level of respectful maturity; they’re young, but their troubles are still valid. Especially when combined with the whole “survive and save everyone” thing.

The character of Cronos is particularly tangled in this topical web; any dorky movie nerd can identify with his continued dismissal, but he counters it with such impassioned enthusiasm that the film never gets too broody or dark. If Tavo is the heart of the film, Cronos is the guts.

One thing the film seems to be lacking is any sense of despair. Let’s be clear: this is not a bad thing. It’s oddly refreshing. Are there “we’re at a dark moment and it could get rough” points? Yes. But it somehow stays light on its feet, pushing audience engagement with quick pacing and forward momentum.

MexZombies definitely wears its Zombieland influences on its sleeve – between the overt references (Cronos dressed as Tallahassee for Halloween) and the slightly less direct (the overuse of slow-motion blood spurts). The appreciation of the zombie film oeuvre is high in this one, from Romero to Thriller to Shaun of the Dead. Overall, the whole film is a smorgasbord of pop culture references, which actually kind of adds to its whole teenager cinephile vibe.

Zombie movies are a dime a dozen, so you really have to do something bold to stand out. MexZombies may not be brazenly bold, but it is a light, bloody snack. Consider it part of a zombie-watching balanced breakfast.

MexZombies played as part of the Toronto After Dark Film Festival‘s 2022 lineup.

If Hulk Hogan’s 1990s family-friendly action comedies have taught us anything, it’s that a burly wrestler is quite possibly the best qualified person to watch your kids. Daniel Turres’ Here For Blood confirms this lesson, but with a whole lot more blood. And cultists! It’s a great time.

In Here For Blood, college student Phoebe (Joelle Farrow, Level 16) is encouraged to find a substitute for her regular babysitting gig so she has more time to prepare for an upcoming exam. Her friends are pretty persistent, and they have a valid point, so Phoebe turns to her rugged rough-and-tumble boyfriend Tom (Shawn Roberts, Resident Evil: Afterlife) to ask the big favor. He reluctantly agrees, and thus begins a night of mayhem. A group of cultists attack the home and attempt to kidnap Tom’s young ward, Grace (Maya Misaljevic, The Boys), unaware that she’s under the care of a heavily muscled man with a real knack for violence.

As a horror comedy, a lot of the laughs are in the presentation; it’s less about the script and more about the delivery. Another key to its comedy is in the bloody mess that erupts across the screen. Here For Blood uses ample amounts of blood – buckets of it, in timed spurts – which just adds to the absurdity.

The practical effects are done by The Butcher Shop FX Studio, and they’re top notch over-the-top gruesome gory goodness. It’s gooey, gnarly, visceral fun. If you like your horror with a heavy dose of campy violence, Here For Blood has just the kind of bare-knuckle punch you’re looking for.

The cast have just the right amount of fun with it. Roberts as babysitter extraordinaire Tom O’Bannon charms his way through a burly front to create a character that you really grow to care for. Misaljevic as Grace is endearingly precocious, and it’s always a treat to see Canadian legend of stage and screen, Michael Therriault (Chucky).

In Here For Blood, the stakes are high – the fate of the world, etc etc – but there’s a carefree avoidance of logic that somehow still works out. Who needs a rational explanation when there’s so much fun to be had?

Director Daniel Turres (Terry’s Car Gets Stolen) shows a real flair for the melodramatic elements that make the film work. At moments – greatly aided by the synthy score from composer Norman Orenstein (The Editor) – the film plays like a cult classic 80s horror. Turres understands the assignment and crafts a plucky retro-inspired blood-soaked horror comedy.

A surefire crowd-pleaser, Here For Blood is a treat for fans of classic 80s horror, but with a modern flair. The film is full of a passionate love for the horror genre and all the splatter that comes with it.

Here For Blood played as part of the Toronto After Dark Film Festival‘s 2022 lineup. Horrifying folklore has never been so fun as in the Estonian dark comedy Kratt. Similar in tone to Psycho Goreman, this film is filled with kid’s hijinks and mischief getting wrapped up in Estonian mythological figures in an entertaining way.

The film centers around two pre-teen kids who have been dropped off at their grandmother’s farm house without their cell phones to show how their parents were raised while their parents go off to a hippie resort. They start bemoaning their lack of internet and their grandmother shows them that instead of being bored, there are lots of chores around the farm that they could be doing to help out.

She also tells them about a demon called the kratt, which can be ordered to do anything by their maker. They just have to constantly supply them with jobs to complete. After meeting some other local kids in the town, they happen upon a book that explains how to make that very same creature, and of course, they do. Unfortunately, in the process, they accidentally get their grandmother involved and she becomes the kratt. Now the children must figure out how to get their grandma back unscathed while also having fun with the kratt doing their chores.

This fantasy horror film is goofy and bold. The characters are what bring it together, as they all possess unlikable characteristics with a heart. They’re dumb but lovable, and the humor falls on them but never disrespects them. The children in particular are fun to watch and lead the film confidently.

While it centers on kids, it doesn’t hold back on horror elements. There are few sequences in this film that don’t hold back on the blood. With that said however, this film could still be watched by both adults and kids. It’s an off-kilter contemporary horror film reminiscent of Billy and Mandy’s Grim Adventures.

Additionally, the action in this film is surprising and quirky. One moment the kids are talking to their Siri stand-in, Vivi, asking for advice only to reveal it is run in a Russian child labor scheme run by their fentanyl-cooking mother. Laughs ensue.

Midway through, the plot does seem to lose some of its momentum as it constantly juggles a few different plotlines at once, some of which are dubiously included. Especially if this film is made for a younger audience in mind, it could be a tighter story focusing on the grandma kratt and children.

Outside of the story, the film is artfully constructed, with fantastically cluttered sets, and engaging cinematography and editing.

Those who like to have a little fun with their horror and are looking for something that could be family friendly or on the less upsetting side might enjoy this surprising Estonian film. Look for it on iTunes, Amazon, Google Play, INDemand and DISH.  Check out the trailer below.