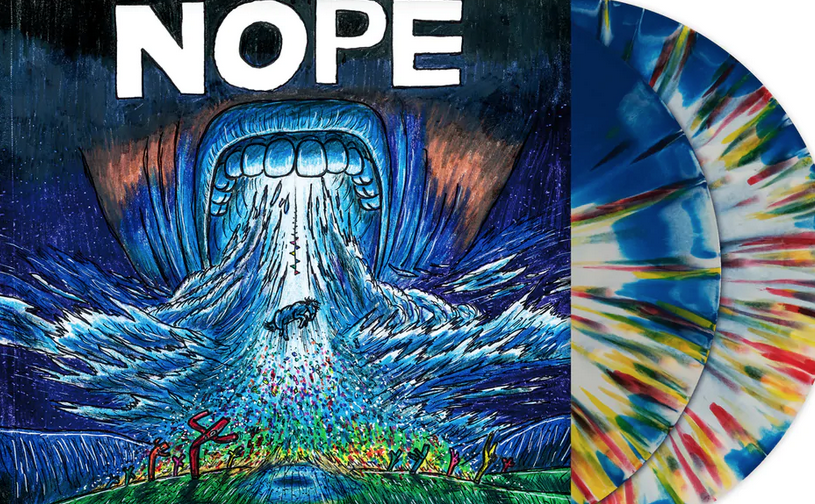 Jordan Peel’s Nope wasn’t just a great film. It also had a rad soundtrack and score to boot. Waxwork Records made sure to focus their attention on the new rad score by way of a beautiful new vinyl with artwork from Ethan Mesa and we are glad they did.

“Two siblings running a horse ranch in California discover something wonderful and sinister in the skies above, while the owner of an adjacent theme park tries to profit from the mysterious, otherworldly phenomenon.”

Nope marks Abels’ third feature film score with director Jordan Peele, having previously scored Peele’s GET OUT and US. The album also features songs from the film, including a new version of Corey Hart’s classic “Sunglasses at Night (Jean Jacket Mix)”, Dionne Warwick’s “Walk on By”, The Lost Generation’s “This is the Lost Generation”, Exuma’s “Exuma, the Obeah Man”, and a never-before-released gem by a young Jodie Foster, “La Vie C’est Chouette” from the 1977 film MOI, FLEUR BLEUE.

You can head over to Waxwork Records now to place your Pre-order on the Nope soundtrack. The record is due to ship out this December.

Muse Unleashes Spooky Video For ‘You Make Me Feel Like it’s Halloween’ Filled With ‘Christine’, ‘It’, ‘The Shining’ and More Muse unleashed a new single from their upcoming LP, Will of the People. The single is a perfect drop for this time of year considering it is all about the spooky season. The new synth-driven, haunted space opera of a song is rightfully titled, You Make Me Feel Like It’s Halloween.

The new video is wall-to-wall filled with horror movie references. Everything from Friday the 13th to Misery is represented across an intensely fast-edited horror show. The whole thing is built around a group of masked burglars breaking into an old mansion and then discovering that they chose the wrong house big time.

You can check out the video for Muse’s You Make Me Feel Like It’s Halloween below. Let us know what horror movie references you spot in the new video. Rob Zombie’s The Munsters has a few surprises up its sleeve leading up to its release. Today Waxwork Records announced the addition of the original Sonny and Cher – lover pop duo track for The Munsters soundtrack. This special edition vinyl comes in an awesome happy face yellow and brings with it all kinds of psychedelic vibes.

Of course, the actual track is Lily and Herman singing to each other. Lily’s voice is great while Herman’s is hilariously ear piercing.

The I got You Babe product description goes like this:

Can you dig it, man? Come groove with Herman and Lily Munster as they pay tribute to the classic Sonny and Cher love song featured in the all-new Rob Zombie feature film, THE MUNSTERS!

Waxwork Records is thrilled to present “I GOT YOU BABE” as a deluxe 12″ single pressed to 180 gram Yellow vinyl! Featuring performances by Sheri Moon Zombie & Jeff Daniel Phillips, produced by Rob Zombie and Zeuss! The single’s B-Side features an etching of the two kooky love birds and is housed in a psychedelic heavyweight jacket with matte satin coating presented with all new art by Rob Zombie!

Head on over to Waxwork Records right here and place your order for the Munsters collectible.

Make sure to check out the hilarious track below. Killer Klowns From Outer Space is still easily one of the most fun horror FX films. The entire invasion by alien Klowns is brilliant stuff. The Chiodo Brothers’ creation has stood the test of time and remained one of horror’s most endearing pieces of cult cinema. Waxwork Records has put out a fantastic vinyl that really does capture the magic from the film with its multicolored vinyl. One popcorn colored and the other cotton candy colored. Two of the Killer Klowns favorite weapons.

The synopsis for Killer Klowns From Outer Space goes like this:

When teenagers Mike (Grant Cramer) and Debbie (Suzanne Snyder) see a comet crash outside their sleepy small town, they investigate and discover a pack of murderous aliens who look very much like circus clowns. They try to warn the local authorities, but everyone assumes their story is a prank. Meanwhile, the clowns set about harvesting and eating as many people as they can. It’s not until they kidnap Debbie that Mike decides it’s up to him to stop the clowns’ bloody rampage.

The original score to Killer Klowns From Outer Space is kicked off by the classic 80’s horror movie theme track, Killer Klowns (From Outer Space) by California punk band, The Dickies. The ‘nightmare merry-go-round’ continues with a smattering of menacing electronic brass sections, electric guitar, bombastic drum machine beats, & harpsichord combined with sci-fi synth elements to capture the ultra-specific origins of the antagonists. Massari’s score to Klowns is a retro-synth joyride from start to finish featuring immediately recognizable cues from the beloved 80’s cult-classic!

You can head over here to pick up your copy of Killer Klowns From Outer Space on vinyl now.