Dennis DePue was a real-life killer that inspired the horror movie Jeepers Creepers!

Plenty of horror movies have been inspired by actual events over the years, from The Texas Chainsaw Massacre to Child’s Play. In fact, as we recently told you here on iHorror, even A Nightmare on Elm Street had real-life inspirations, despite the fact that a burnt-faced dream demon of course never truly existed.

You also might be surprised to learn that 2001’s Jeepers Creepers was similarly derived from true events, a fact that wasn’t in the least bit played up by writer/director Victor Salva. The movie is of course about a winged monster that plucks out human eyeballs, and though it may seem impossible that it was grounded in any sort of reality, it most definitely was. 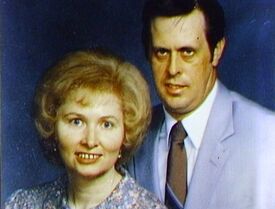 It was in 1990 that Michigan resident Dennis DePue became the subject of a police manhunt, after murdering his wife and dumping her body behind an abandoned schoolhouse. The story goes that the murder was an act of vengeance, after his wife filed for divorce, with DePue shooting her in the back of the head.

In Jeepers Creepers, the monster dumps bodies behind an abandoned church, much the same way DePue disposed of his wife, but it wasn’t DePue that inspired the film so much as it was the testimony of two eyewitnesses who saw him dump the body. While driving around on a long stretch of Michigan road, Ray and Marie Thornton spotted DePue doing his dirty deed, and then found themselves followed by the killer, who suspiciously tailed them in his van for several miles. Sound familiar? Because it certainly should, if you’ve seen Jeepers Creepers.

Now what’s most interesting about all of this is that the TV show “Unsolved Mysteries” ran a story on the DePue case in March of 1991, a full ten years before Jeepers Creepers was made. The segment featured a re-enactment of Thornton’s story, which bears a striking resemblance to the first half of Salva’s film.

The opening sequence of Jeepers Creepers was directly lifted from the episode, right down to specific shots and dialogue exchanges. Like the Thornton’s, the brother and sister in the film even pass the time by playing the very same license plate game, making the inspiration undeniable.

Oddly enough, while Salva has credited Steven Spielberg’s Duel with serving as an inspiration for the film, he’s never once given any sort of credit to “Unsolved Mysteries,” leading me to believe that he hoped nobody would ever make the connection. Of course, there’s nothing wrong with using a ripped from the headlines story as the basis for a film, though the direct lifting of the “Unsolved Mysteries” re-enactment of that story is suspect, to say the least.

Shortly after the 1990 episode aired, real-life ‘Creeper’ Dennis DePue was caught, and subsequently committed suicide. So no, he never went on to stalk a bus full of shirtless dudes, in case you were wondering!