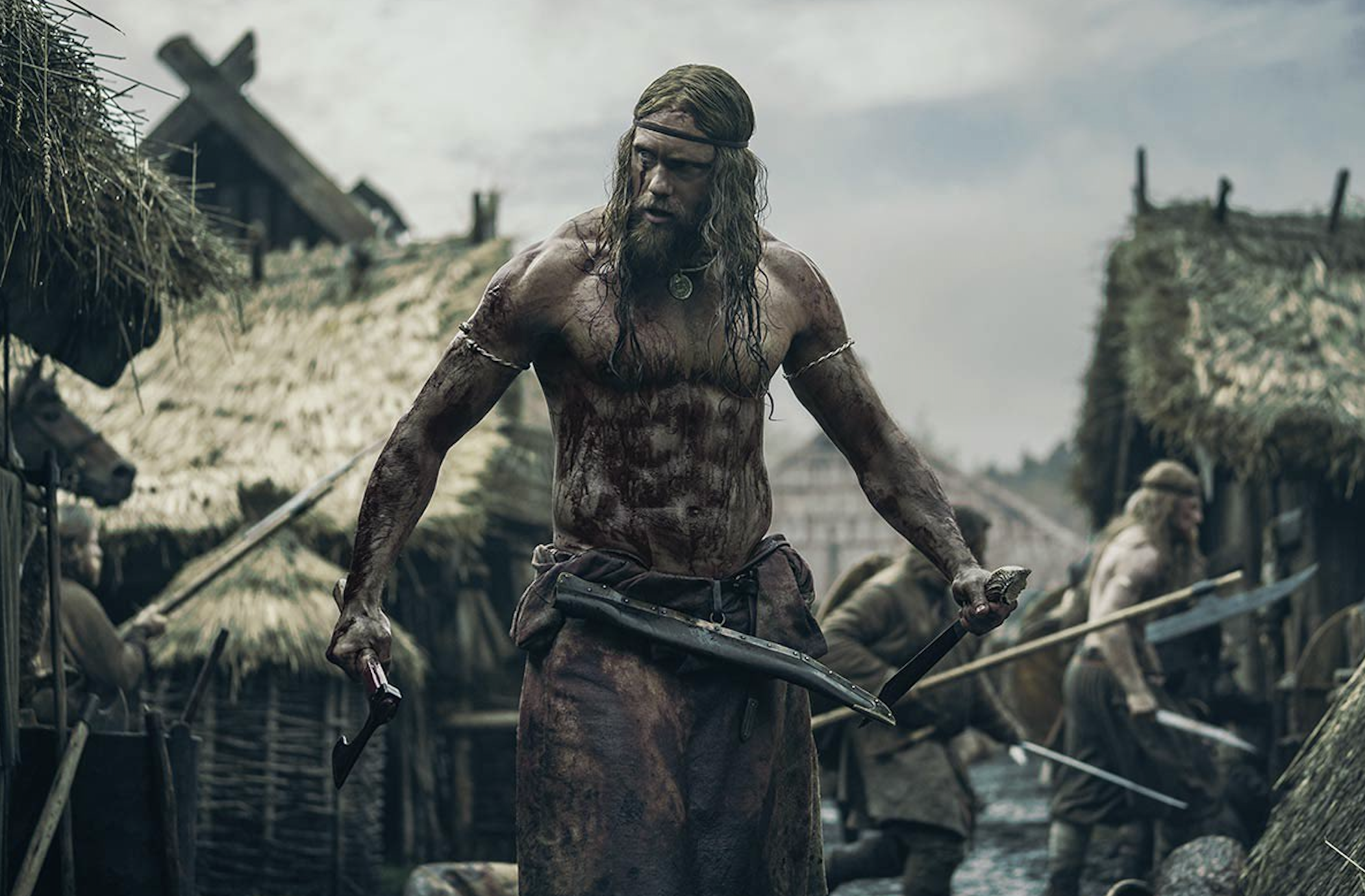 The Northman Officially Gets R Rating for ‘Strong Bloody Violence’

Robert Eggers, the man who brought us the award-winning films The Witch and The Lighthouse, has a new film hitting theaters this April 22, 2022.

The Northman is an action-filled epic that follows a young Viking prince on his quest to avenge his father’s murder.  Apparently, this is the same Norse legend that Shakespeare used as inspiration for Hamlet.

Watch the official trailer below:

Viking tales are in demand with Netflix’s Vikings: Valhalla standing strong as one of the streaming service’s top 10 shows.  What may take The Northman to the next level above all the other popular Viking stories is the reported abundance of strong bloody violence and nudity.

“That climax, where I rip a guy’s throat out and howl at the moon…it was primal,” Skarsgård explained. “I just let it all out. I was exhausted, and I think you see it in the shot. I was a wreck. Truly a wreck.” – Alexander Skarsgård

Don’t think Eggers will be leaning on just sex and violence to win over fans.  The Northman is sure to have some spectacular performances with its all-star cast that includes the likes of Nicole Kidman as Queen Gudrun, Ethan Hawke as King Horvendill, Willem Dafoe as Heimir the Fool, Björk as the Slav Witch, Anya Taylor-Joy as Olga, and Claes Bang as Fjölnir alongside Alexander Skarsgård as Amleth, the Viking warrior prince. Flashback:Check out our interview iHorror.com did with Director Robert Eggers for his film The Lighthouse.

Although all signs are looking like The Northman should be one hell of an entertaining ride, they do have quite the hurdle to overcome.  The production cost for The Northman came in at a whopping $90 million and other big-name movies will be trying to pull away some theatergoers. In any case, they definitely have our attention and we’ll be there with popcorn & soda in hand this April 22nd!

Here is a breakdown of the violence and nudity in The Northman:

People, including women and children, are frequently brutally slaughtered with a variety of weapons, including swords, knives, arrows, spears, and axes. Individuals are decapitated, stabbed through the head, disemboweled, drugged into a panic that leads to suicide, burned alive, and ritualistically sacrificed. Several animals are killed. Corpses are frequently seen, and on some occasions, dismembered and artistically rearranged.

Male and female characters are seen nude in sexual and non-sexual contexts. Characters are briefly seen having sex from a distance without clear detail. There are references to incest and allusions to rape. A character smears menstrual blood on another. There is one sexually suggestive scene where buttocks are visible and there is thrusting detail. A woman shows her genitals, covered in menstrual blood, to a man to deter him from raping her. A woman attempts to seduce her own son, who rejects her.

There are several uses of mild curses and one use of scatological profanity.

Adult characters are seen drinking, sometimes to excess. Characters, including children, are given hallucinogenic substances as part of religious rituals. Corbin Bernsen managed to make two of the most nightmarish low-budget, direct-to-video releases of their time. The Dentist and its sequel went for the jugular with its big gory effects and sleazy tale of a Dentist losing his mind. Both entries are incredibly entertaining and director Brian Yuzna really did have a goopy blast with both entries. Plus, Bernsen is completely having a blast coming unhinged throughout. The Dentist and its sequel are worth the price of admission.

Now, The Dentist and The Dentist 2 are coming to a killer blu-ray collection from Vestron’s collection. The artwork and the special features for both discs are both a serious treat for fans of the Yuzna filims.

Dr. Alan Feinstone is a rich and successful Beverly Hills dentist. There’s only one problem, he’s insane. Dr. Feistone loves perfection, and he expects it of everyone. Unfortunately, no one is perfect. This unacceptable fact annoys the good doctor and leads him to commit his one small imperfection: murder. Deadline is reporting that Scarlett Johansson’s production company These Pictures and Warner Bros. have won the bid to make a limited series based on the 1992 John Katzenbach novel Just Cause. This is an order from Amazon Studios that will appear on Prime.

In the Katzenbach novel, journalist Matthew Cowart helps to overturn the conviction of a Florida man accused of murder. The twisty plot was the going trend in 90s mystery cinema.

Those who have seen the original film adaption from 1995 may remember that Sean Connery starred alongside Laurence Fishburne in the crime drama. Some names and situations were changed from the novel.

Johansson’s version will also stray a bit from the source material with the actress playing the lead instead of a man. Her name will be Madison “Madi” Cowart.

This is also a full-circle moment for the Black Widow heroine. One of her first roles was in the original film, playing Katie Armstrong; the daughter of Paul Armstrong (Connery).

This will be the first time Johansson has turned to television in a prestigious role. The star has had a rocky past with Disney and the MCU universe.

Back in 2021, the actress sued the house of mouse over a breach of contract. The suit claimed, “that the studio sacrificed the film’s box office potential in order to grow its fledgling Disney+ streaming service. Disney countered that Johansson was paid $20 million for the film.”

That case was settled in September 2021, but the terms were not disclosed.

Christy Hall (I’m Not OK With This, Daddio) will write the script for Just Cause. Hall was the consulting producer on Apple’s Servant. Who wants to buy a little piece of hell in Amityville, New York? The large Dutch Colonial house that inspired the book The Amityville Horror, and the subsequent films, is currently back on the market. The owners are even giving it a price cut to a meager $955,000 for those looking for a bargain.

The 10-room house had an original asking price of $1.45 million last year, then dropped to $1.35 million. The current owners say they are going through a divorce, and selling the property; it has nothing to do with the structure being haunted.

“It’s not that the house is haunted or anything,” said current owner Odalys Fragoso. “We had wonderful times in that house. I never felt anything, nothing whatsoever. I was just happy that we were buying the house because we saw the potential of it.”

The selling agent, Donna Walesiewicz, agrees, “‘If there were a curse on it, I wouldn’t be in it. It is what it is, a nice old stately home.”

If you’re a horror movie fan or just a fan of the paranormal, you have probably heard of this house located at 112 Ocean Avenue (now 108). It was the site of the mass murder carried out by Ronald DeFeo Jr. against his entire family back in 1974.

A year later George and Kathy Lutz bought the property but infamously only lived there for 28 days before abandoning the house, claiming it was violently haunted.

A best-selling book by Jay Anson was released in 1977 which chronicled the “true story” of the Lutz family’s nearly month-long ordeal. They claimed swarms of flies would appear, ooze would seep from the walls and toilet, their young daughter was stalked by a pig-like entity, and, at one point, Kathy became possessed.

There was a movie based on the book that was released in 1979 and became a box office hit. Since then many sequels and other cinematic works, 28 in all, have used the famous house as inspiration.

Walesiewicz insists that the lower asking price has nothing to do with it being haunted. Instead, she says the housing market has, “dropped tremendously. That’s why people are coming down and buying homes in cash. They aren’t making money in other investments. They are putting it in real estate.”

That being said, remember that the Lutzs bought the house at a drastically discounted price in the beginning as well.

Video: Jenna Ortega Reveals Her Weird Side During Interview