When there is no more room in Hollywood, 'RRR' will walk the Earth. Although not a horror movie, RRR, now streaming on Netflix (US), is just so grand, so epic, so sprawling we just couldn’t allow you to miss it — we just had to let you know it exists.

We know some of you are a bit apprehensive when it comes to subtitles but given how much stunning cinematic bravado RRR uses to tell its story, your eyes will do most of the listening anyway. There’s just no looking away —- and this movie is 180 glorious minutes of nonstop visual effects, stunts, music and yes horror fans, blood, and violence! Not even Steven Spielberg could make this movie any better.

This article isn’t a movie review, and I’m not going to try and oversell you. But I will say this: just watch the first 10 minutes and if you’re not completely invested drop me a comment and @me personally to chew me out. You can use F words, that’s totally fine.

What is RRR about?

First, is a disclaimer, made by the filmmakers themselves. Although RRR has historical elements, it’s not based on fact. Any similarities to people living or dead are purely coincidental they say. The tiger chase alone is evidence of that. Additionally, that tiger scene makes Gladiator’s look like the Kitten Bowl on Super Bowl Sunday.

The movie’s title card doesn’t even come onscreen until 40 minutes in!

Director Rajamouli was intrigued by the stories of real-life freedom fighters Komaram Bheem and Alluri Sitarama Raju (Ram). He took artistic liberties when writing the screenplay and imagined a universe where Bheem and Alluri actually become friends.

RRR is the story of the duo and their rebellion against the British Raj in India. Rajamouli has given them superhuman physical powers: It’s a $72 million dollar over-the-top nonstop action fantasy.

Obviously, the British Crown doesn’t fare well in this story set in 1920. They are made to resemble evil, racist oppressors who constantly treat the people of India as subpar humans. It might be accurate for the times? But, consider this a trigger warning. 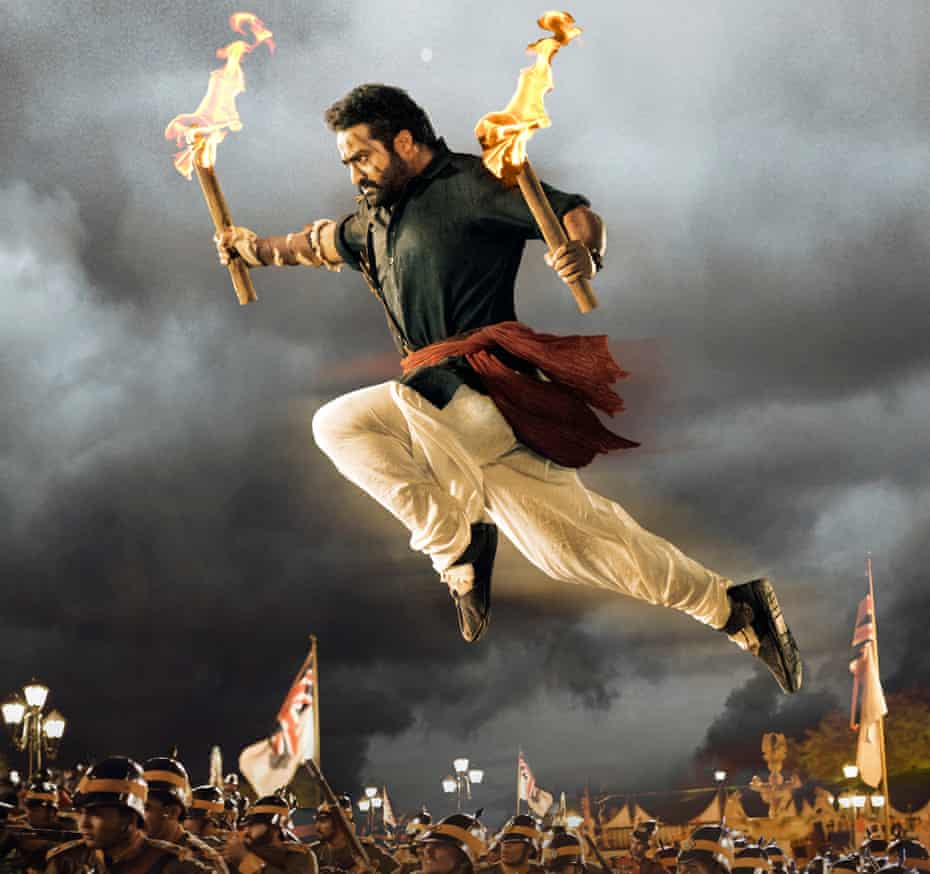 Spontaneous flashmobs, opulent sets, slow-motion action works —- where even the CGI is part of the artistic tapestry —- RRR is a grand gesture to the world of movie entertainment. Like the honey badger, this movie doesn’t give a f***!

Just when you think the filmmakers have hit their special effects budget for the entire movie, they follow it up with an even more over-the-top sequence. Rinse and repeat.

It’s got a few problems, but, who cares?

Although it’s not perfect; some of the acting is operatic and the drama is drenched in soapy histrionics, RRR contains enough steam in its engine to plow through any soft spots. And when it’s all over, you’ll wish there were another 180 minutes to enjoy.

I guess this turned into a review after all. And maybe I did oversell it a bit, but c’mon if I told you that in one sequence near the middle, a tiered wagon of wild animals is unleashed in slow motion upon the British army where they lay waste to soldiers by mauling, impaling, and death rolling for a full five-plus minutes, wouldn’t you want to watch anyway?

That scene alone would be enough for a final act in any Marvel movie, but here it’s just a small part of Act I! 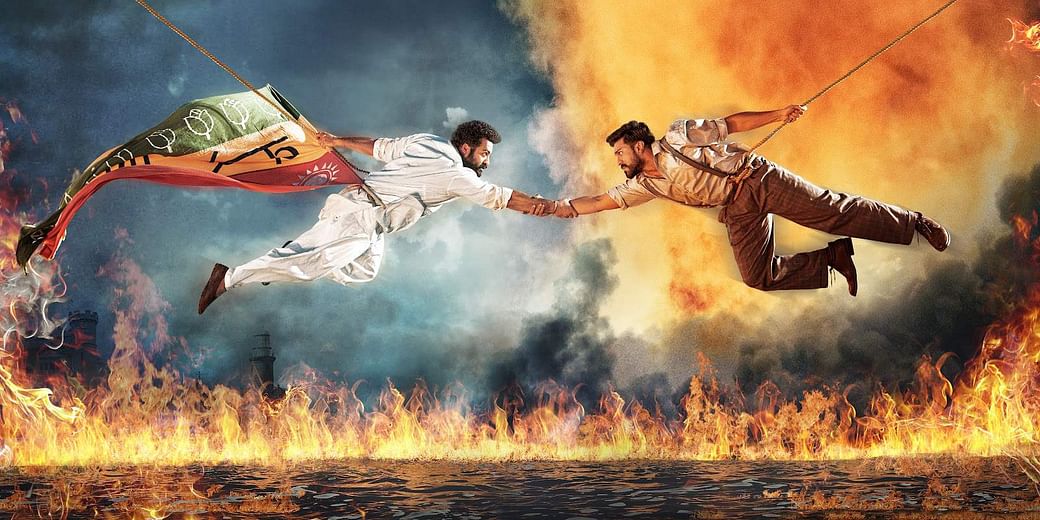 If you love movies

RRR isn’t a perfect movie, but from beginning to end it never lets up. Colorful, crisp, and relentless Rajamouli has thrown down the gauntlet for any action film to come after it. Hollywood would never try a remake — I don’t think they have the balls.

No, it’s not a horror film, but as fans of incredible, visually striking, epics, RRR gets an honorary mention from iHorror. 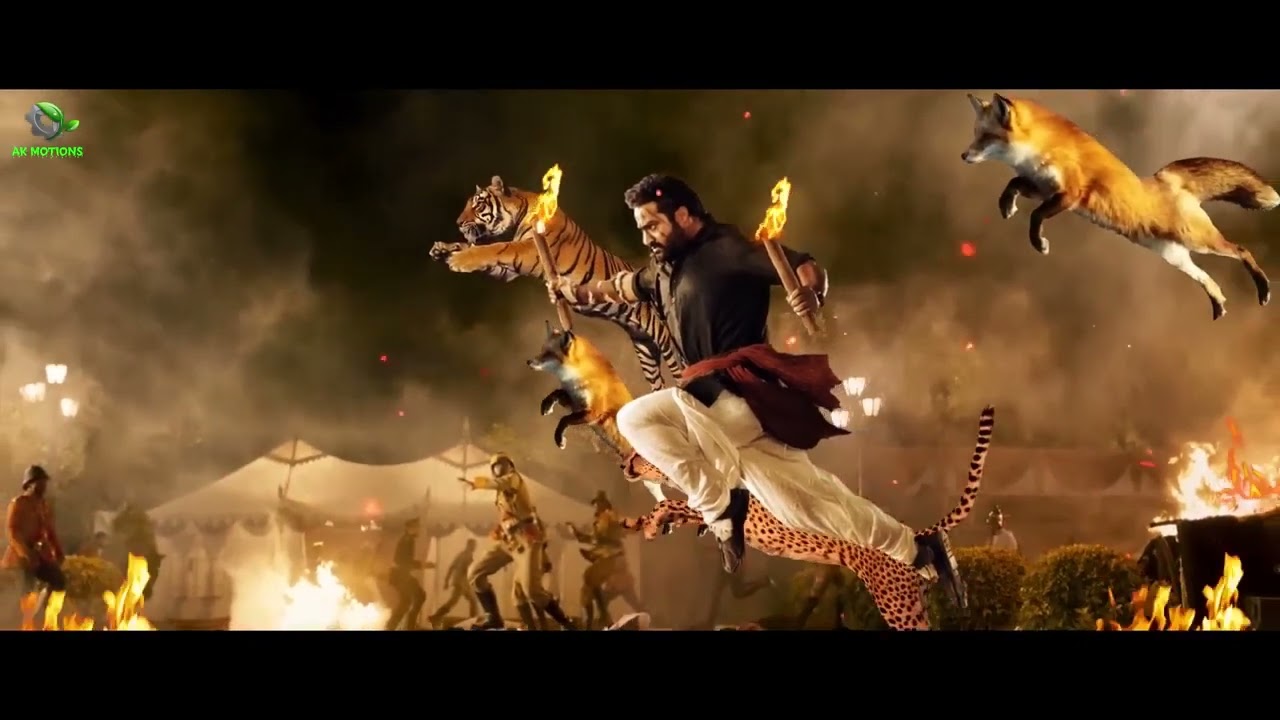