Drafthouse Films and Olive Films are re-releasing the cult hit and rarely seen 1981 movie “Roar” in theaters on April 17. “Roar” has been touted as a movie like no other, and one that will never be made again. The tagline reads, “No animals were harmed in the making of this picture, 70 cast and crew members were”.

The movie follows estranged wife Madelaine (Tippi Hedren) who visits her husband (Noel Marshall); a man living on a refuge with a menagerie of wild beasts. These animals include tigers, elephants, leopards and cheetahs. She arrives at the sanctuary with her 3 children (A young Melanie Griffith among them), but her husband is nowhere to be found, instead she is met by a pride of lions and untamed beasts.

The intrigue of “Roar” is that it was even made in the first place. Produced by Noel Marshall (“The Exorcist”), the movie is filled with cringe-worthy shadenfruede, which depicts animal attacks and maulings. The problem is, some of these altercations are real. Although this movie is a big-budget Hollywood production, it could also be viewed as a documentary of sorts. The concept was to let the cats interact naturally with the cast and crew. But these animals aren’t predictable; at 8 feet long and up to 400 pounds these cats act purely on improvisation. 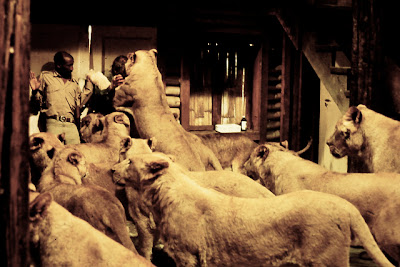 Of the blood shed on the set: Hedren was injured from a bite wound, which wasn’t edited out for the movie. Producer Noel Marshall was hospitalized for a very terrifying lion attack, and a young Cinematographer named Jon De Bont (Speed, The Haunting) was scalped during filming and needed 120 stitches. Assistant Director Doran Kauper was bitten in the throat during a take and it almost cost him his life. Melanie Griffin (Hedren’s real-life daugher) suffered such a major laceration, it required plastic surgery.

Tim League, CEO of Drafthouse Films, has written an essay about the film, the cast, and the constant disasters that plagued the picture. His essay titled “The Grandeur of Roar” describes animal professional’s reaction to Hedren’s and Marshall’s pitch for the film, “Upon approaching animal trainers for support, they were told their idea was a suicide mission and were dismissed as ‘brainsick’ and ‘completely and utterly insane.’“ League writes.

IMDb reports that the animal attacks in “Roar” are real. Over 150 cats were used in the film, the crew had to remain behind safety cages and protective barriers, but sometimes that wasn’t enough. Leagues’ article says that Hedren and Marshall had been breeding the lions in their Beverly Hills home until it became too small and they moved to a ranch north of Los Angeles and began shooting “Roar”.

Despite the danger of working with such unpredictable wildlife, Mother Nature also took its toll on the production. The Southern California filming location suffered Wildfires and a flood, killing some of the cats and bringing production to a halt. The problems were so severe the movie took 11 years to complete.

Variety has called “Roar” the “most disaster-plagued film in the history of Hollywood.”

Tippi Hedren has been quoted as saying,”This was probably one of the most dangerous films that Hollywood has ever seen. It’s amazing no one was killed.”

Recent reviews of the film have compared it to what might be a bloody production of a Walt Disney film.

“It’s like Walt Disney went insane and made a snuff version of SWISS FAMILY ROBINSON!” Hitflix

“Like watching a live-action Lion King as Mufasa holds a switchblade to your throat.” – Complex

The movie will have a theatrical re-release on April, 17, head over to Drafthouse Pictures for more details.