This year, in honor of St Patrick’s day, I watched the entire Leprechaun series to bring you a list of some of the best and most ridiculous kills from the whole franchise. Happy St Patrick’s Day!

The first film in the series (starring Jennifer Aniston, before no one told her life was gonna be this way – clapclapclapclap) has several somewhat conventional kills, and then there’s this one. The Leprechaun – in all his ferocity – kills a man by jumping up and down on his chest with a pogo stick. A damn pogo stick. The slow motion as he approaches is just ridiculous. This movie is, in general, hard to take seriously, but this just doesn’t help.
Body count: 4
Leprechaun’s death: Four leafed clover/gum is shot into his mouth using a slingshot, he is then thrown into well full of gasoline and blown up.

We’ve got a cameo here, people. Michael McDonald (pre-MadTV) flexes his comedic muscle (kind of. He moves it, at least). What this scene lacks in a good script, it makes up for it with face-melting goodness.
Body count: 5
Leprechaun’s death: Chest impaled with wrought iron bar, blown up

The third installment in the franchise is straight up batshit crazy. The main character somehow gets leprechaun blood in an open wound and – like some tiny Irish werewolf – begins to turn into one himself. Apparently the lore states that leprechauns are extremely territorial –  or competitive.. or.. something – so naturally it becomes a bit of a battle royale between the two. But with more limericks.

Anyways, on to the murder! Immediately following a scene where this creeper almost rapes a girl because the magical leprechaun lust spell wears off at a terrible moment, this guy is electrocuted by an awkward sex robot. Good! Earned it. But let’s talk about this scene for a second. It looks like the designer combined the robot from Short Circuit with a blow up doll and said “yeah okay let’s just run with this”. And they did. Because it seemed like a good design.
Body count: 7
Leprechaun’s death: His pot of gold is burned with flamethrower, he is incinerated

Can I say that? I’m gonna say it. This woman’s vanity is her ultimate end after her lips, hips, and boobs over-inflate to the point of explosion. We’ve all learned a little something from this movie – don’t fuck with leprechaun wishes, man.

For a movie that’s weirdly plot heavy, this kill might be my favorite. He bursts through a guy’s dick. Through his dick. How, you ask? Well, that’s a strange thing to get hung up on, but I’ll tell you. Back in the Leprechaun’s cave of wonders (his lair, I guess) a bunch of marines shoot him while rescuing an Alien space princess that the Leprechaun wants to marry so he can be alien royalty. Again, it’s weirdly plot heavy. The Leprechaun is shot, and as a marine victory pisses on his corpse, he uses his magic to send his energy up through the stream of urine to hide in the marine’s junk until he can make his grand escape and begin to wreak havoc. This movie is so strange.
Body count: 8
Leprechaun’s death: Ejected into space, blown up

Our man loves a good bit o’ green. He’s not great with sharing his gold though. This scene is pretty silly (aren’t they all) but you do have to admire the force it must take to stab someone through the stomach with a bong. It’s a blunt instrument (I am so sorry for that pun).
Body count: 14
Leprechaun’s death: Shot with four leaf clover bullet, thrown into wet cement

Of all the franchises to get a gritty reboot, I did not expect Leprechaun to be one of them. And yet, here we are. The 2014 reboot has none of the limericks – no Warwick Davis either – but much more blood than the previous entries. The best kill in the film is actually pretty rad. One of the protagonists has their spine ripped out. Their spine! Like a surprise visit from a chainsaw-wielding junkie, it’s unexpectedly gnarly.
Body count: 10
Leprechaun’s death: Decapitation

I couldn’t find a clip of my favorite death from the 5th installment in which the Leprechaun punches a hole through a guy’s stomach. 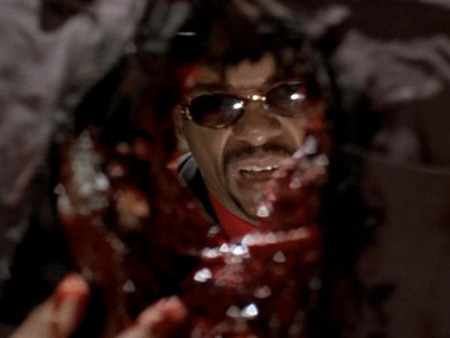 Disappointing, I know. Instead, I’ll leave you with perhaps one of the most memorable moments of the whole franchise. A rapping Warwick Davis. Enjoy.
Body count:11
Leprechaun’s death: Not applicable. He wins!

Do you want to relive all the best moments from the franchise? Order the complete BluRay set here.