10 Shocking Horror Movie Opening Scenes That You Will Never Forget For a horror movie to be effective it needs an opening scene that’s going to immediately grab your attention and hook you in. They’re meant to scare the living daylights out of you so that you want to continue to watch the rest of the film.

Each of these openings that I’ve selected are terrifying in their own ways but they are, what I believe, to be the scariest ones of all time. 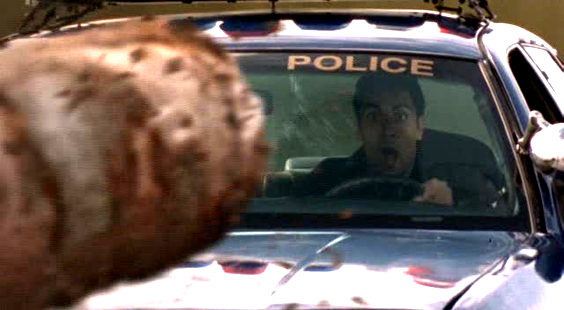 Don’t lie, every time you drive by a logging rig, your mind instantly goes to Final Destination 2 and you drive as fast as you can away from that truck. That’s exactly why I picked this Final Destination opening over the rest because this one could actually happen compared to the others.

Like all the other Final Destination films, this one has Kimberly (A.J. Cook) receiving a premonition of a deadly highway pile-up caused by a semi hauling logs. This premonition out-does the original by building up the suspense as we go from car to car, patiently waiting for the carnage to begin. When the sequence does begin its mayhem—each death happening so fast and quick—a complete bloodbath. Why this opening sequence works is because it effectively plays on everyone’s Dystychiphobia: fear of dying in a car accident. 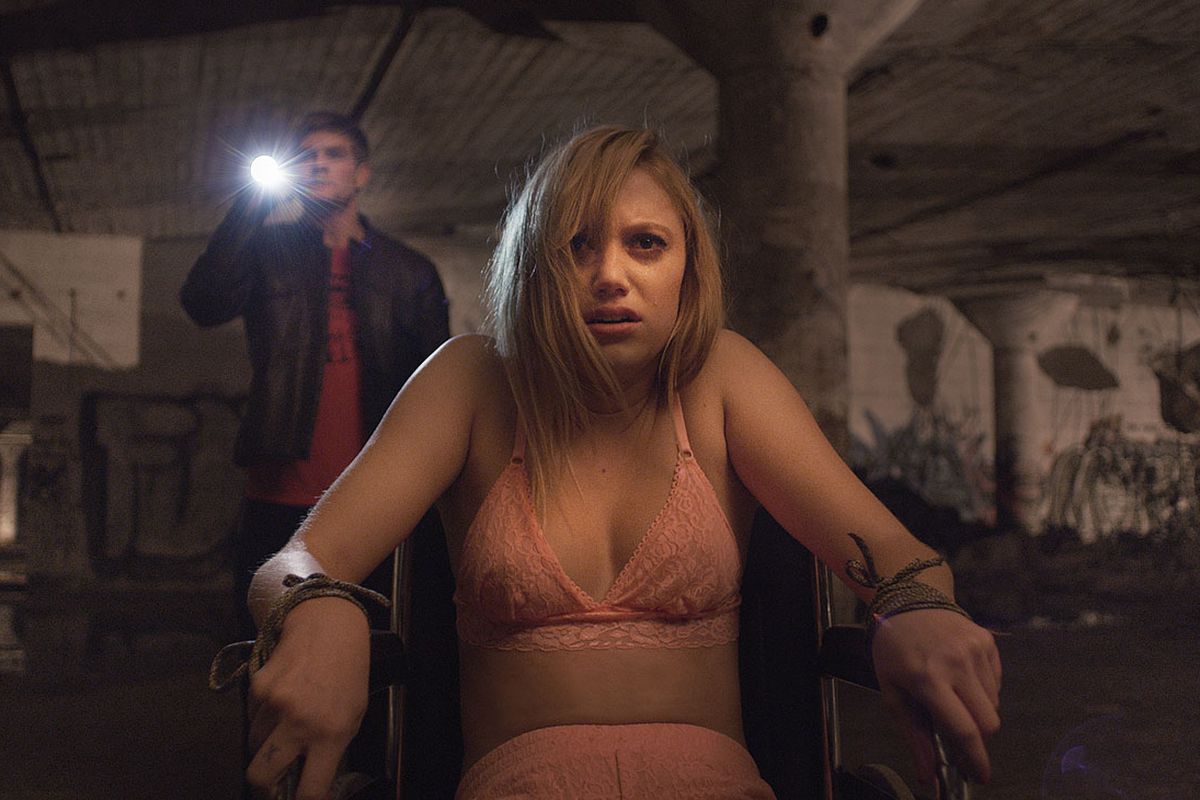 It Follows has the perfect teaser. The two-minute opening follows Annie (Bailey Spry) who frantically comes running out of her house and we’re thinking any minute someone with a mask will be chasing after her. But that’s not the case. We’re not sure what she’s running from. But whatever it is, no one but her can see it. Resisting help from a neighbor and even her own father, she eventually flees and drives to the nearest beach.

Annie is later found alone, scared to death, and waiting for whatever has been following her. Nothing is offered up here but a suspenseful score, a terrified character, and that something frightening is following this girl.

The next morning, we find her dead body mangled and contorted. Leaving us with many questions: Who killed her? What killed her? And how could her body end up like that? 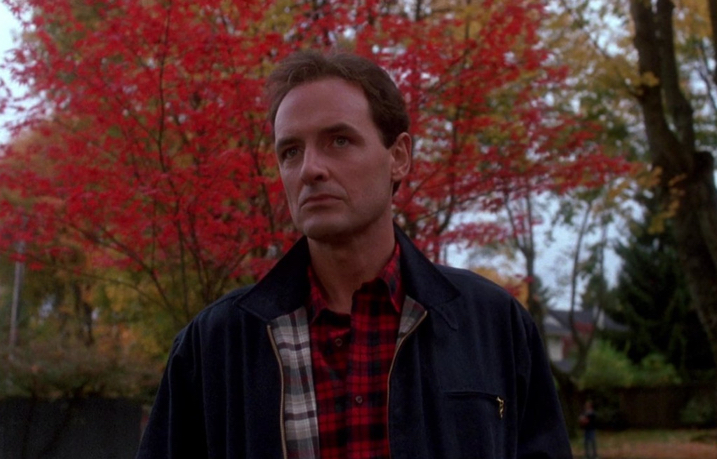 Without a word of dialogue, we get one of the most unsettling openings in horror history with The Stepfather.

We open on Jerry (Terry O’ Quinn) staring at himself in the mirror, covered in blood and we know something terrible has happened. We’re just not just sure what. He begins washing the blood off his body and altering his appearance; shaving off his beard, dyeing his hair, and changing his eye color.

But it’s obvious that this isn’t the first time he has done this.

Nothing is explained as to why he is covered in blood and changing his appearance until he goes downstairs; revealing the bloody, gruesome murder of his family. He’s the one that committed it and his casual nature is truly frightening.

The scene has an eerie stillness and silence about it that makes the scene more unsettling. The whole idea is unnerving—how easy it is for a man like a stepfather, to easily transform into someone like Jerry Blake who can blend into society, find a new family, and start another murder spree.

In 1968, George Romero unleashed his masterpiece that frightened audiences into believing that the world had been taken over by the undead. No one had seen anything quite like it before, but it’s the film’s opening sequence that stands out to me.

The film starts out with Barbara (Judith O’ Dea) and Johnny (Russell Streiner) on an idyllic, late afternoon drive to visit their mother’s grave. George Romero wastes no time and thrusts our characters into mayhem as they are both violently attacked by a man that seems to have just crawled out of the ground.  The violence is in your face, it’s relentless; from the zombie smashing Johnny’s head into a grave marker to his endless pursuit of Barbara.

From then on, no one is safe. 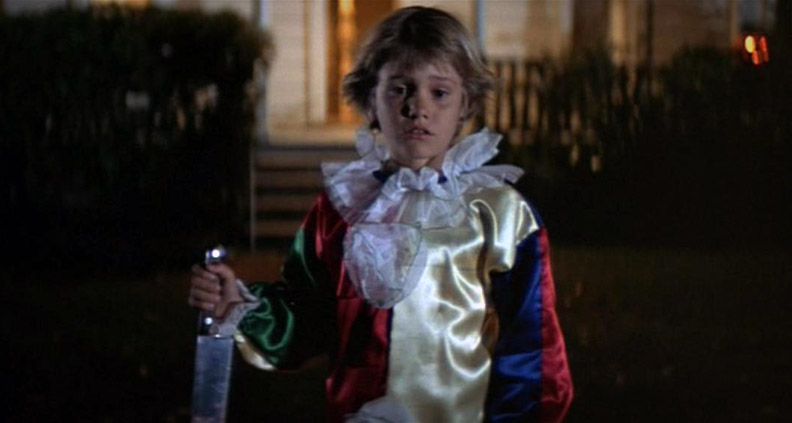 We all know the story of Halloween: escaped mental patient Michael Myers stalking babysitters on Halloween night. But, it’s the film prologue that sets the movie in motion. John Carpenter crafted a suspenseful opening sequence viewed from the killer’s P.O.V.

The prologue follows the killer as he stalks a young couple on Halloween night. He begins by creeping inside the house and grabbing a butcher knife as he watches a young man leave. The same shot follows the killer upstairs where he picks up a Halloween mask and puts it on. From there, we follow the killer upstairs; a young girl is combing her hair; she’s half-naked and completely vulnerable. He then begins brutally stabbing her, we hear the sounds of the knife piercing her flesh and her body falls onto the floor.  If that wasn’t scary enough the most shocking part is that that the killer turns out to be a six-year-old boy! It was the perfect way to introduce the killer and carry the rest of the film.

From the second Dawn of the Dead begins it never lets up. The opening title sequence is both disturbing and creepy and uses Johnny Cash’s song “When Man Comes Around” for an end of the world montage. It is the perfect way to start a zombie flick.

Dawn of the Dead begins with Anna (Sarah Polley) finishing her nursing shift and having a date night with her husband. Unbeknownst to them, a zombie apocalypse has just started. The next morning, the couple is awakened by their neighbor’s daughter who has been turned into a flesh-eating zombie. This is where the action begins and never stops.

Anna is thrown into a world of sheer chaos. Her husband is turned into a zombie. There’s carnage all over the place, violence is breaking out in the streets. Pure high-adrenaline zombie craziness. Zack Snyder showed us what the beginning of a believable zombie apocalypse looks like; chaotic and frantic.

Jaws has one of the greatest opening-scene shockers of all time. The sequence alone will make you think twice before going into the ocean.  The opening is very minimalistic, and we don’t actually see too much. The scene starts out with Chrissie (Susan Backlinie), a hippie, who just wants to have fun and go skinny dipping. What she doesn’t know is that something huge is lurking beneath the water.

The attack comes as a surprise not just to Chrissie but to us as well. We watch her get brutally jerked and dragged through the water by an unseen force. All we see is her terrified reaction-leaving us to imagine what is happening below her which turns out to be a Great White Shark chomping on her lower-half.

The opening sequence is undeniably frightening with the mixture of hearing Chrissie scream in agony “It hurts,” to the frightening imagery of her being dragged underneath the water. It still works to this day and that’s why Jaws remains a masterpiece.

The movie that made you terrified to answer the phone—no I’m not talking about Scream; I’m talking about the nerve-fraying When A Stranger Calls. The opening sequence acts much like a short film and is a spin on the Urban Legend, The Babysitter and The Man Upstairs.

The prologue follows Carol Kane who plays Jill Johnson, a typical teenager, babysitting on a Friday night while gossiping on the phone with her girlfriend about boys and doing homework. Seems pretty normal. Until she begins receiving harassing phone calls from a mysterious stranger, who keeps asking, “Have You Checked the Children?” The voice is unnerving, chilling even.

The opening sequence gets more unsettling after each phone call as they get increasingly more disturbing. The score elevates the fear; puts you on edge, waiting for the next call. All of this leads up to an unforgettable finale revealing that all the calls have been coming from inside the house. This opening will have you warding off babysitting for life.

If there was one movie in 2020 that instantly hooked me, it was the Invisible Man. The film has one of those opening sequences that says it all without saying a word. Without giving us any backstory, we know that the woman in the opener, Cecilia (Elisabeth Moss), has been living a life of Hell and this is the night she is finally escaping from her husband.

From the minute Cecilia opens her eyes you’re instantly hooked. The entire sequence is nerve-racking and the tension never lets you go. As you are watching her carefully make her escape, you hope she doesn’t make a sound or a make wrong move. We felt her fear throughout the entire sequence. You’re constantly thinking; will he wake up? Why is she running? Will she make it out? The whole scene is effective; it pulls you immediately in, ramps up the fear, and gears you up for the rest of the film.

“Do you like scary movies?” The question that started it all.

Much like When A Stranger Calls, the opening plays out like a short film. The opening starts with Casey Becker (Drew Barrymore) receiving phone calls from a mysterious stranger. First, the calls are flirtatious and fun; talking about scary movies and poking fun at the horror genre. The phone calls go from playful to menacing then get outright deadly.

The scene soon escalates as the killer terrorizes her with a sadistic game of movie trivia, one wrong answer and you die. From there you are playing the game right along with her (Don’t lie you said Jason too.)

Wes Craven held nothing back when it came time to killing Casey off. Casey’s death is vicious as she is repeatedly stabbed and gutted while her parents listen helplessly on the other end of the telephone. Having Wes Craven kill Drew Barrymore off in the opening act meant that all bets were off for the rest of the film.

Did these opening sequences scare the hell out of you? I know for me that these have been the ones that have terrified me over the years.

What do you think? Are these the scariest opening sequences of all time?